I’ve been sick for literally two weeks, and it’s mostly my own fault. I broke the golden rule about being sick, which is to stay home and rest. Instead I hosted huge dinner parties, went to drunken costume benders, partied in Aspen for 5 nights, flew internationally for work and internationally for a wedding. All in two weeks. So obviously I am not recovering, and it’s a miracle that I don’t have something worse. On top of all that, I have probably spread my viral infection across the globe. But enough about me.

THE COLD AND FLU

There is a very, very small chance that you have a bacterial infection unless you ate a five-day old lobster salad which travelled to many hot sunny picnics, or if you have some other kind of food-borne illness, but most sicknesses are viral – meaning that you contracted a virus from somewhere.

Technically, a virus is not really an organism since it lacks a nucleus and cell wall. A virus is basically just a strand of DNA or RNA surrounded by a fancy polyhedron which is specific to each virus and studded with sensory receptors. A virus is like a seed, in that it is dormant until its receptors find the right conditions to grow and replicate. The most famous viral epidemic was the Spanish flu in 1918, which globally infected more than 500 million people, and killed at least 130 million. But let’s not get ahead of ourselves.

When you’re sick, you need to support your recovery with bed rest and easily digestible foods like chicken broth and coconut oil. The last thing you want to do is run around to pharmacies and herbal stores finding preparations, although you probably should.

If the best you can do is make it down to your kitchen to blend up a concoction of what you already have in your cupboard, then this Quick and Dirty Antiviral preparation is for you.

You really need a vitamix or powerful blender to shred the ginger and liquefy it so that you can drink it down. I run the vitamix for at least 30 seconds. The concoction turns a lovely yellow opaque color, and I pour it into a clear glass so that I can really appreciate it.

This is a very hot! And spicy! medicine. It’s not something you want to drink every day, nor should you. However, you should drink this at least three times a day when you have a viral infection, which is basically what most cold/flu sickness are. 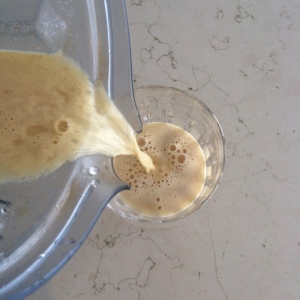 WHY IT WORKS: GINGER

Ginger is a hemagglutinin inhibitor, which means it stops viruses from attaching to the surface of airway epithelial cells (in the lungs). Once a virus does attach, it softens the cell’s surface and sneaks inside to hide from the immune system. The virus performs this “softening” technique by using an enzyme called neuraminidase. The good news is that ginger is also a neuraminidase-inhibitor, so ginger prevents any breaches to the cell wall.

However if a virus has managed to latch onto a cell wall and alter its structure and sneak inside, it will stimulate the cell to create a vacuole of protection around itself inside the cell. The vacuole needs to stick itself to the inside of the cell wall, which it does with hemagglutinin (a “gluey” substance) – but of course it can’t in the presence of ginger, a hemagglutinin inhibitor.

The chain of events that brings about viral illnesses is called a cytokine cascade – as cytokines are the signaling molecules of the immune system. Ginger prevents some of the early parts of the cascade as well as some of the later parts. However ginger does not prevent all of them. (The full blown cure for severe cytokine storms could require Chinese skullcap, lomatium, elder, licorice, inmortal, pleurisy root, Chinese senega root, boneset, cordyceps, Japanese knotweed, kudzu, astragalus, angelica, salvia, green tea and zinc; but at that point you are heading to a pretty special international herb shop and not just down to your kitchen for a Down and Dirty Antiviral potion).

Ginger is also good at thinning your mucus, which helps you to expel it, and will help to lower your fever during infection.

WHY IT WORKS: COCONUT OIL

Many viruses have a lipid coating, such as influenza, herpes, HIV, and cytomegalovirus. This lipid coating can be destroyed by monolaurin, a monoglyceride which is formed in the human body from lauric acid, which we get from human breast milk and coconut oil, and a little bit from pasture-raised ruminant butter. Coconut oil has more lauric acid in it than any other food outside of human breast milk. Its derivative, monolaurin, is not just antiviral, but also antibacterial, anitprotozoal and antimicrobial.

WHY IT WORKS: CAYENNE

At a general level, cayenne raises body temperatures, makes you sweat, and increases activity of the immune system. It is also high in vitamin C and helps create more white blood cells for your lymphatic system, which troll the body looking for infected cells. Cayenne also increases mucus, which allows you to trap and expel virally infected cells through coughing up phlegm and blowing your nose.

WHY IT WORKS: HONEY AND ROYAL JELLY

You could write books and books on all the things that honey, royal jelly and propolis can do for human health. In fact, those books have been written and were first written thousands of years ago. The way it works is that bees pick up pollen from medicinal plants in their ecosystem and then concentrate the pollens and ferment them (which increases and changes their medicinal properties) and then expel them as honey, royal jelly, wax and propolis for the benefit of their hive. The medicine they create is complex, and also depends on the ecosystem they are inhabiting. You can pay $50 for mono-crop Manuka honey from Australia, or you can get a $5 jar of your own local regional honey from a farmer’s market. They are both incredible products for healing, and the list of what they can do and can cure is too long for this blog. Beware of pasteurized honey, honey from China (diluted with HFCS), or any large commercial honey which just cannot be trusted in this day and age. Also beware of honey where bees could have been exposed to pesticides and neurotoxins, because those poisons are also concentrated in your honey. If you know of a place where no pesticides are used in a 50 acre radius, consider installing some bee hives and habitats.

Just because honey is basically magic doesn’t mean sugar and carbohydrates are suddenly okay when you have a viral infection. In fact, the opposite is true. When you have the flu (or any viral infection), glucose significantly increases viral load. So when you are sick, the ONLY carbohydrate you should be consuming is a tiny bit of honey. Not gallons of orange juice, not tubs of jello: Just a little bit of honey because of its profound antiviral, antibacterial, anti-etc properties.  Conversely, insulin reduces illness parameters and viral load – however obviously I don’t think you should inject yourself with insulin just to beat a fever. But you should be very, very wary about being hospitalized with a viral infection and immediately put on a glucose drip or offered sugary Pedialyte-type drinks in order to keep your nutrient levels adequate. Sugar feeds your virus, not your immune system. Is that something you want to do?

That oscilloccoccinum homeopathic remedy available at most stores is also great, if you can remember to take it as frequently as required, and at the very first sign of flu.

If you can get to a herbal “pharmacy” or someplace that can make you a custom tincture or tea, ask for something with all or most of the following ingredients: Chinese skullcap, licorice, lomatium, cordyceps, isatis, astragalus, boneset, elder, houttuynia.

Zinc and vitamin C are also helpful, but watch out for glucose or fake sweeteners in their formulations.

Stephen Harrod Buhner is the consummate authority on natural remedies for emerging and resistant viral infections and bacterial infections. He has written these two books that absolutely deserve shelf space in your Armageddon cupboard:

GET WELL SOON AND STAY AWAY FROM ME!