Seriously, let’s not make a big deal about this. A couple organic beets, some water, some salt and an air-lock jar. It’s like 5 minutes and then you forget about it for 3 weeks.

Beet Kvass is a 10th century Ukranian probiotic sports drink, essentially, in that it’s full of electrolytes and is super hydrating. It also claims to be an anti-inflammatory blood tonic, to cleanse the liver, lower blood pressure, to oxygenate the blood and spare oxygen when exercising. The Ukranians call it a “Cure All”, and there’s a rumor that the only people who didn’t develop blood poisoning after the radioactive Chernobyll explosion are those that religiously consumed beet kvass. As such, beet kvass and juice are frequently recommended for cancer patients undergoing radiation therapy.

There are complicated ways to make it, and then there is THE EASIEST, most traditional method which is obviously my preference.

Maybe add a clove, a cardamom pod, a star anise, a bit of orange peel, a knob of ginger or anything you think will go nicely with the earthy flavor of fermented beet juice. The lactic acid will also work its magic on these ingredients, unlocking beneficial polyphenols.

During this time the Lactobacillus have been converting the carbohydrates in the beets into lactic acid, carbon dioxide and small amounts of acetic acid and ethyl alcohol. The carbon dioxide displaces any oxygen in the jar, creating an anaerobic environment suitable for subsequent species of Lactobacillus to propagate.

After three weeks, strain out the pink liquid and put it in a serving bottle, preferably with a flip-top airlock style lid, and keep in the fridge. Drink at your leisure – but start slow. Just half a cup a day is all you really need to get the benefits. You might not dig it at first, but you’ll get used to it. Like all the other weird stuff, you’ll end up craving this earthy, salty elixir too. 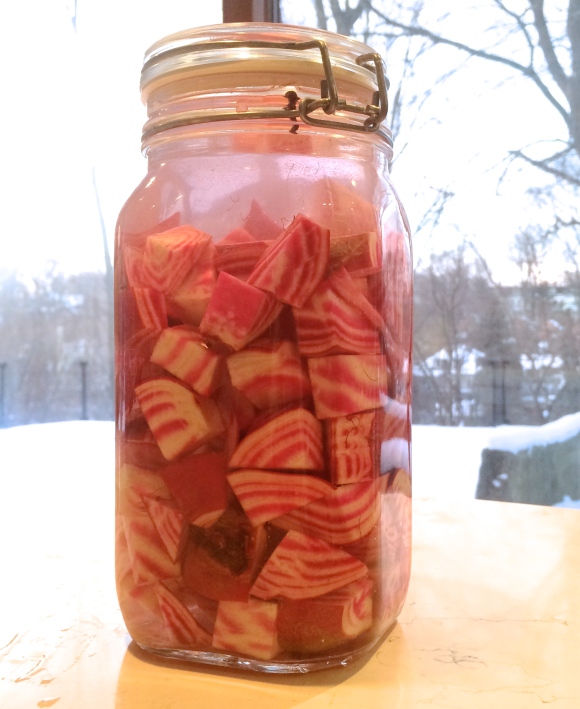 Leave about a cup of the liquid in the bottom of the beets, fill again with water and another TBS of salt, and ferment the same beets again for another three weeks.

After that point, you can strain out a second batch of kvass and also eat the slightly tangy beets on their own or in a salad. These 6 week old beets will have much less sugar in them, a slightly tangy taste and will be teeming with beneficial bacteria.

While beets are a pretty starchy, high carbohydrate vegetable for anyone on an LCHF (Low Carbohydrate High Fat) diet or similar – fermented beets are much lower in carbohydrates so totally acceptable.  (Whereas if you just “pickle” beets the conventional way by boiling and dumping them into sugary vinegar, they will actually have a much higher level of carbohydrates and sugars. Don’t do that, silly!).

When you ferment vegetables (or anything) without adding a starter culture, it’s called doing a “Wild Ferment”. You’re getting your starter culture from the very thing you are culturing. You can use wild yeasts when making bread and beer; you can use wild bacteria when fermenting vegetables and fruits – and cheeses, wines and meats etc. And that’s just way cooler and more natural. Let’s always do it wild. Less fuss, less muss: more WOW factor. Got it?

The bacteria in our body outnumber our own cells by a factor of ten, which has to make your jaw drop.

What that essentially means is that over the last couple billion years, Earth bacteria has been co-evolving with us – you might even say “designing us” – in ways to make itself more mobile, virulent and imaginative. Consider that bacteria used to be stuck to a rock underwater; now it can walk around, drive, fly airplanes and be exposed to all manner of exciting cuisines and experiences.

It’s not like we are just the hapless host; we have benefitted immensely from bacteria. Bacteria protects our skin membranes, gives us immunity to diseases, helps digest our food and even creates essential nutrients for us out of food that would otherwise be useless to us. Although there are hundreds of bacteria that are on our side, there are also bacteria that totally suck for us. By encouraging and cultivating the bacteria on our team, they will keep the bad bacteria at bay. It is totally heavy-handed for a human to go after bacteria in general, by means of anti-bacterial wipes and sprays. It’s not our job to try to target bad bacteria – we are too big and clumsy to figure it out. Our job is to promote the health and propagation of our good bacteria so that it can take care of the bad bacteria on our behalf. This is symbiosis, baby! Our good bacteria has been engaged in this dance for billions of years, so there no point presuming we can do it better just because Louis Pasteur figured out how to boil stuff.

Lactobacillus bacteria in particular inhibits the growth of diarrhea-related bacteria such as Shigella, Salmonella and E. Coli. In addition, Lactobacillus competes with pathogens for receptor sites at the mucosal cell surfaces (nose, mouth, underpants region and entire digestive tract), making it more difficult for us to get sick. What this means is that our body is meant to be teeming with Lactobacilli, and has evolved to thrive in its presence. However our modern, sanitized environments and dead, overly fibrous or rancid foods create conditions that deplete Lactobacillus along with other beneficial bacteria. So stop doing that.

Making and drinking beet kvass is too easy not to do. I know you have a couple beets down there in your fridge drawer that you have been too lazy to cook. So just spare five minutes of your time and get on with it. This is a great winter project, and much needed in this season of flu and cold.

More detailed information about the different Lactobacillus bacterias and their products and by-products, including a table showing all the major lactic acid bacteria involved in fermented fruits and vegetables.