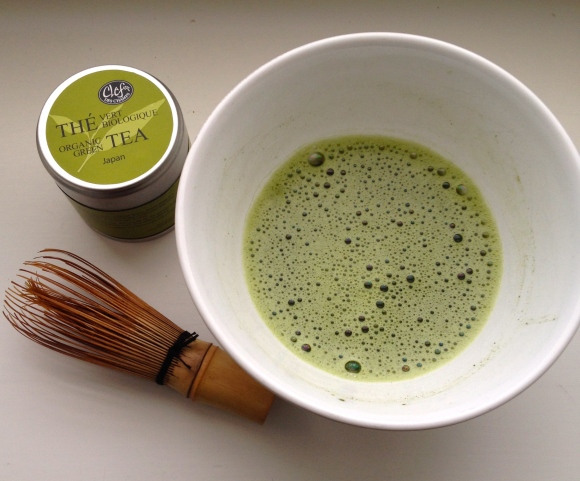 Oh brother, another drink. The thing is, I just assumed that everybody was already doing this but it turns out I need to hammer this message home:

YOU NEED TO DRINK MATCHA EVERY DAY

Matcha is finely stone-ground, high quality shade-grown, steamed green tea leaves. You spoon about 1/2 teaspoon into a lovely bowl, add some water just south of boiling (60-70 degrees Celsius), and whisk it until frothy and dissolved. If it doesn’t froth well, then what you’ve got is crappy powdered green tea, not matcha. The whisk is supposed to be bamboo (called a “chasen”), and your whisking style is supposed to be in a Z pattern. Think Zen. Hey, if no one’s watching: whisk how you like.

Green tea has a ton of benefits; we all know that. But see if you can get through this next paragraph without having a FOMO panic attack and brewing yourself a preventative cup:

The problem is, you need to regularly drink at least 2 cups a day for these benefits, and probably a lot more. Drinking that much tea is so exhausting.

SO LET’S CUT TO THE MATCHA

Matcha has all the benefits of green tea (catchetins, amino acids), but possibly 137 times more. That’s kind of a huge multiple, so let me back it up with this study from the University of Colorado in 2003. To break it down, the antioxidants in a bowl of matcha tea are 137 times stronger than in a cup of the green tea specifically available at Starbucks, which is to say: stronger than low quality green tea. Most of the green tea available in the West is low quality. So if you can get your hands on some really fancy imported high quality green tea, and if you infuse the leaves at least 3 times, then possibly matcha is only 3 times richer in antioxidants than your custom import. But why go to all that trouble when high quality, organic matcha powder is readily available at health food stores, tea shops and high end groceries – and is usually sold right next to the bamboo whisk.

Matcha powder was invented by a Buddhist monk, Eisai Myoan in the late 1100’s. He introduced it to his fellow monks as an early biohack – using it helped the monks calm down and prepare for meditation. The secret weapon: L-Theanine. This is an amino acid and a glutamic acid which crosses the blood-brain barrier and induces changes in brain alpha waves and reduces mental and physical stress. Combined with caffeine, L-Theanine improves cognition, promotes faster reaction times, and increases working memory.

You only need one cup a day, and should start with a small amount of matcha powder (1/4 tsp). I’ve been using it for a pretty long time, so I tend to shovel the powder in. But I pay for it. There is A LOT of caffeine in matcha powder, and even though it is slow-release and alkalizing (rather than fast release and acidifying like coffee), you are still going to feel it. Don’t drink this at night unless you are trying to catch up on a whole season of Breaking Bad.

There are also warnings about drinking matcha with milk, as a latté, as conventional dairy milk can reduce the antioxidant effects of the tea. So try almond or cashew milk, especially homemade from soaked organic raw nuts. But I’m not terribly worried about a bit of steamed milk, especially if it gets you to start enjoying matcha. Something is better than nothing.

Drinking matcha tea should be a ritual, not a fast-food convenience. See if you can keep a little bowl, a whisk and a small tub of matcha powder at your office or place of work, and enjoy this every morning.

When I’m out and about, I am often tempted to order a Matcha Latté from Starbucks or the Whole Foods café – but be warned that these chains use a matcha powder that is really low quality and diluted with sweeteners. Always ask for unsweetened (it will still be sweetened, just less so), and know that you are having a treat, not a healthful beverage.

Finally, a shout out to my cousin Kyra who forgot her matcha tea ceremony set at my cottage six years ago, which turned into me appropriating it and discovering a new love. THANKS!