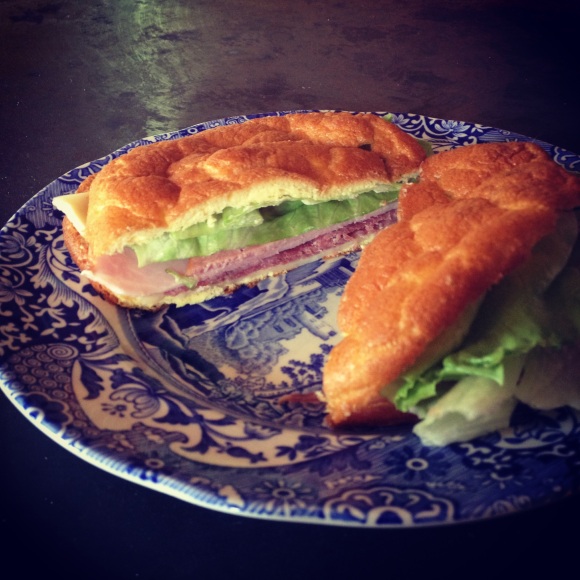 I’m not here to add anything to this recipe, just to say that I finally tried it. I baked them up, sliced them in two, and filled this weird little bun with salami, Swiss cheese and mustard. It was a revelation! I was eating a sandwich again! But without any aftermath of insatiable hunger and bloating.

What I’m talking about is this internet sensation called Oopsie Bread. The ingredients don’t seem to add up to anything, and yet by some dark magic they sort of form into flat, airy buns. The reason they exist is to create a case around other foods to make them portable – some people call this a sandwich.

The selling point of the Oopsie Bread over regular bread is that an Oopsie bun has 1g carbohydrate, 3.7g protein and 7.4g fat. This is like a dream come true for the LCHF crowd. In fact, I don’t think I was really “doing” LCHF until I tried this bread.

Consider that a classic slice of bread has 20g carbohydrates, 5g of protein and 2g of fat. Not to keep driving home the point about Lindt chocolate balls and how much I love them, but you could have 4 Lindt chocolate balls instead of that boring piece of bread. And chances are, you were going to have two slices. Just don’t waste your carbohydrates on processed grains. It breaks my heart.

Here is the simple method.

Optional additions to the yolk mixture:

Now gently fold the whites into the yolk mixture.

Onto a baking sheet lined with parchment paper, use a spatula to form 6 “bun” shapes.

Let cool, and slice for sandwiches.

These are great with nut butter, or like I mentioned above with cheese and salami.

Now here are some tips. If you don’t have a scale, then use roughly 1/2 cup of cream cheese for 3 eggs. Or let’s say you have 4oz of cream cheese handy, you can use 4 eggs to make the same recipe. 2oz of cream cheese? 2 eggs. Etc. You can also substitute cottage cheese for cream cheese, but I would really want to blend out the lumps. You can’t really add grated cheese to the recipe, because the buns won’t rise. But you can sprinkle some on top at the end and let the cheese get melty. And you can add any sort of powdered spice to great effect.

One thought on “Oopsie For Real”